An influx of new meat and dairy alternatives are taking over supermarket shelves for good reason. With dietary preferences and ecological stability in mind, more consumers are reaching for these alternatives than ever before. But they’re not settling for the same vegan options that have been available for decades. They want new, innovative flavors, better textures, and trendy alternatives. In this post, we’ll explore the demand behind this trend, it’s projected longevity, and the innovative products rising up to delight choosy consumers.

The global love of protein

In developed countries, protein is consumed in much higher quantities than even nutrition experts recommend. The average American consumes 103 grams of protein per day, which is almost twice as much as what’s recommended. What’s more, around two-thirds of this amount comes from animal sources, when we examine the average consumer.

And in developing countries like China and India, meat and dairy consumption is on the rise as more and more people are able to afford these products and want to improve their lifestyles. But providing larger amounts of protein is a global challenge that meat and dairy alone can’t keep pace with.

Why non-animal protein is on the rise

Is the push for non-animal protein merely a trend or is it more of a movement? Let’s take a look at the contributing factors to the growth of plant-based protein.

Plant-based eating is increasing generationally. While 32% of Millennials state that they want to go completely meat free by 2021, 35% of Generation Z say the same thing.

The growth in non-animal protein products doesn’t all come from demand. Supply is also part of the equation. If companies can increase production of non-animal protein products, then that has the potential to increase demand and the impression of the normalcy and desirability of these sorts of products. In turn, this can positively impact the environment, because food suppliers won’t be using all animal products to satisfy a growing population’s demand for protein.

Not only is there a push from consumers to see more tasty options for non-animal protein, but there’s also drive from food manufacturers, government agencies, and non-profit organizations to see higher quantities of and quality of non-animal foods being offered.

Livestock production accounts for around 15% of global greenhouse gas emissions. As the world’s population grows, it would be detrimental to the environment to expand meat and dairy production at the same rate. It’s no wonder then that non-animal protein is being touted as the food technology that has the ability to “save the planet.”

Around the world, investors, innovators, and policymakers are grappling with the question of how the global food supply will be able to feed the growing population. This is why vegan and vegetarian food isn’t just a trend or a fad. It’s a growing movement, with even occasional meat and dairy consumers seeking out plant-based foods in order to balance out their diet for both nutrition and sustainability reasons.

Additionally, plant-based food is seen as a better way to combat global hunger. Around the world, 850 million people are still grappling with starvation. Clearly, continuing to focus on animal-based protein in the way that the food industry has already done for decades will not solve the world hunger problem because it is an expensive, land-consuming endeavor. However, plant-based nutrition has an increased potential to alleviate the global hunger crisis now and in the future.

Of course, there are tons of challenges associated with creating non-animal derived proteins that consumers will love and that meat and dairy industry lobbyists won’t take down with harmful labeling that make the products seem unnatural.

Variation in reasons for purchasing

One of the biggest challenges with innovating non-animal protein products is simply the fact that the consumers buying them are doing so for different reasons.

The motivation behind purchasing non-animal protein products greatly influences how picky consumers will be when it comes to flavor and texture. Consumers who have been accustomed to meat and dairy alternatives for years will be more likely to try new offers, such as pea milk, which is often smoother and creamier than almond milk. But the consumers who are most likely to enjoy pea milk (people who are new to dairy alternatives) will be less likely to try it because they’ll assume it tastes terrible.

Another big challenge is removing the idea that non-animal protein products are heavily processed. Consumers tend to think of these items as being more processed than their meat and dairy counterparts because they’re taking something and turning it into something else. For example, turning almonds into milk, or beans into burger patties. In reality, meat and dairy products are heavily processed too, but consumers don’t view it this way.

Non-animal protein product innovators struggle to adhere to labeling policies put in place by governmental organizations. For example, some US states regulate the usage of words like “meat,” “burger,” “sausage,” and “milk.” Brands can only use these words on their packaging if they also include words like “plant-based,” “made from plants,” or “veggie” to make it clear that these products are not derived from animals.

There will continue to be battles waged over the use of terminology thought to apply to meat, especially as non-animal protein products grow. Governing agencies need to take into account the concerns of meat and dairy farmers while also allowing these terms to be used fairly, because these are the words that consumers themselves use.

Keeping in line with the clean label trend

In addition, food innovators have to cater to consumers desire to “eat clean,” meaning that they want to consume food products that have ingredients lists which they can read, understand, and pronounce. Non-animal protein products often struggle with this, as the protein itself is given overly scientific names such as “hydrolyzed soy protein.”

Now that we understand the drive towards non-animal protein products as well as the challenges these innovators face, let’s take a look at some of the products that are rising to meet the demand while not shying away from these difficult challenges.

Beyond Meat is one such company that has strived to make their ingredients list as consumer-friendly as possible. While there are still some scientific-looking ingredients, the vast majority of items listed are readily understood, especially when compared with non-animal protein products that have been on the market for much longer than this company’s products.

Non-dairy milks can be used for so many different purposes. SpecPage customer Steuben Foods produces soy, coconut, and almond milk. These products can be purchased as ingredients for other products.

The use cases of non-dairy milk are endless and include:

This company has a very innovative process for developing milk that comes from flora rather than nuts or seeds. Learn more about it from this graphic on their website.

Ultimately, formulating great-tasting non-animal proteins is challenging, but with innovative ingredients manufacturers are up to the task and are creating ingredients that established brands and entrepreneurs will be able to offer for generations. 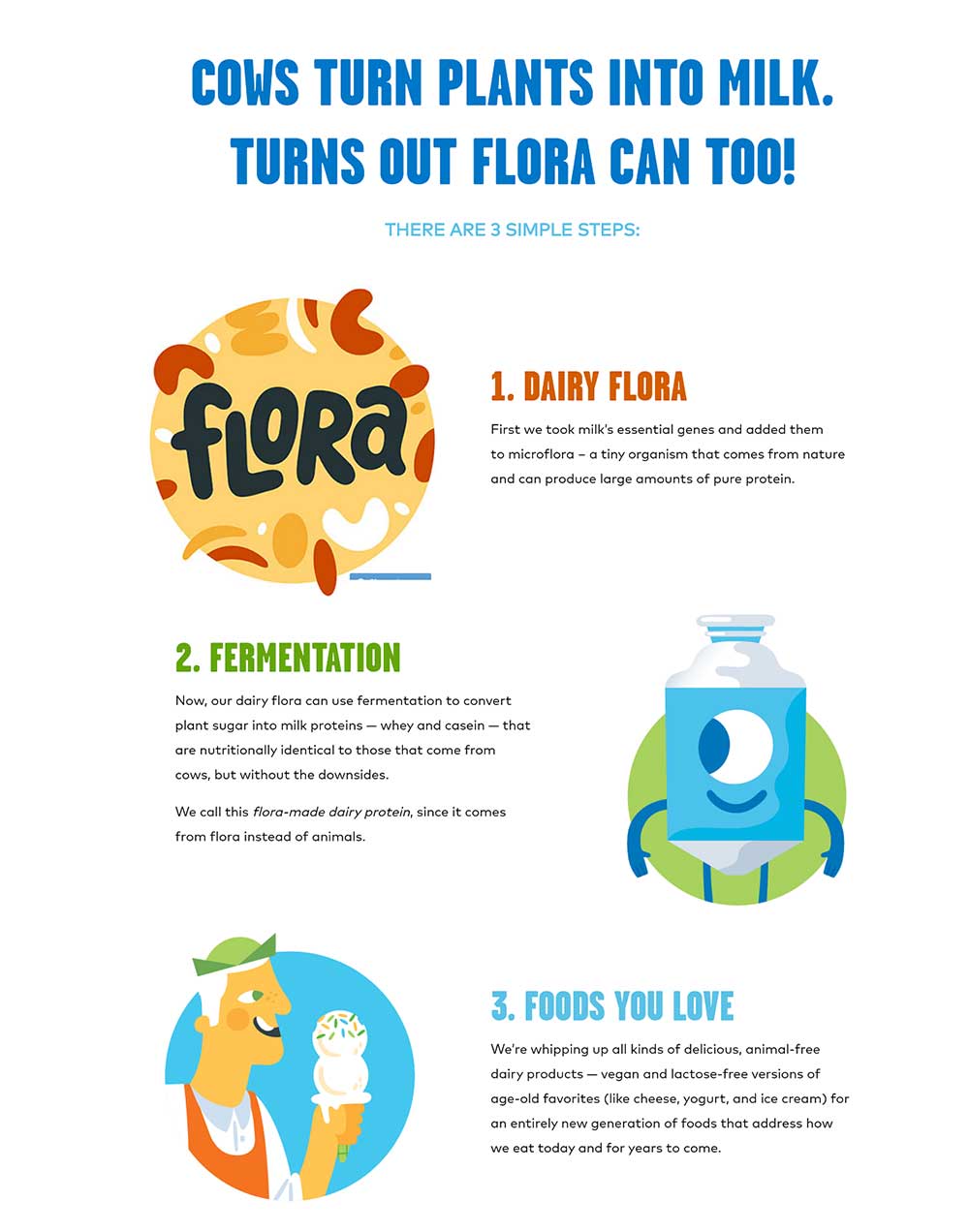 SpecPage is a SaaS PLM that helps product innovators work from anywhere and save dozens of hours a month.

We use cookies to ensure that we give you the best experience on our website. If you continue to use this site we will assume that you are happy with it. Please see our privacy policy for further information. Ok
​x