The phases of food buying behavior in 2020: how the pandemic has influenced consumer purchasing decisions

The phases of food buying behavior in 2020: how the pandemic has influenced consumer purchasing decisions

The strain on supermarkets as a result of Covid-19 has given food and beverage (F&B) manufacturers and retailers many things to think about this year. Years of projected sales growth were packed into only a couple of months, and many of the usual consumer behaviors that they were observing had changed drastically.

Much like the pandemic, which has moved in waves – their consumers’ purchasing decisions have also gone through various phases. Though the industry may continue to move in different ways as the pandemic carries on, there are a few patterns that have stuck out the most.

Starting in the first wave that hit the Americas and Europe back in late winter/early spring, grocery shopping patterns have seemingly occurred in different phases.

Over-stock: As one can imagine, the first phase was characterized by anxious pantry stocking. When news about potential lockdowns first came out, citizens took to the grocery stores in a fury to buy only the practical things. Non-perishables such as canned vegetables, pasta, dried legumes, frozen foods etc. were bought in bulk. The same can be said about toilet paper, which infamously sold out in grocery stores across the world. In this phase, brand loyalty mattered less because consumers wanted to fill up their carts with whatever was available – even if that meant they had to eat a less favorable pasta for the next few weeks.

Regulations, Speed-to-Market and Innovation: How to stay compliant and competetive in an ever-changing market place.

In China, frozen food was especially popular, with some frozen food manufacturers reporting an increase in sales of up to 80%. While family favorites such as dumplings, meat, and seafood were reportedly bought the most, China has also placed some restrictions on these products for fear that they might contain traces of the virus. While the WHO says there is low risk of catching the virus via frozen foods, China has since required full testing on imported frozen foods. As a result, sales for domestic companies have seen the most growth.

Nostalgia shop: After the initial phase of stocking up for essentials, consumers started buying for nostalgic comforts. In the US, consumers who declared themselves as health conscious, had begun purchasing less healthy items for the sake of childhood favorites. In the summer, sales for Campbell’s Soup soared 59% from the previous year, Conagra which supplies the popular Chef Boyardee also rose by a similar margin, and J.M. Smucker, whose sales were steadily declining as healthy foods continued to trend, have also increased profits because shoppers have been purchasing their products for comfort.

It seems that in moments of overwhelming stress and constant bad news, many consumers were using nostalgic snack food to appease them. In this way, phase two was characterized by emotional shopping.

Delivery and long lists prove to be the most persistent

Grocery delivery: The current phase – and perhaps the longest of them – has seen major spikes in grocery delivery options. This includes delivery to homes, as well as curbside pickup options. According to Statista, in just the first half of March 2020, grocery delivery apps had seen over 100% increases in downloads in the US: 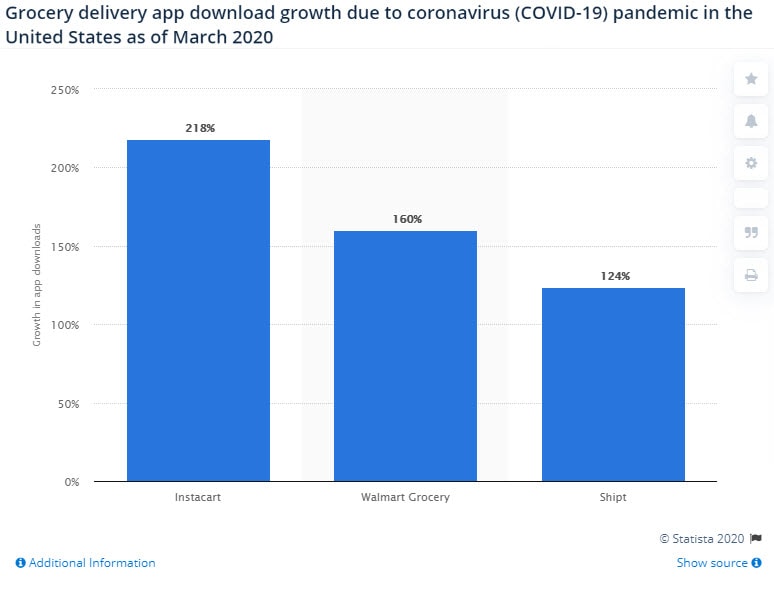 In 2019, e-commerce sales were already rising significantly; however, the first few months of the pandemic brought on a near 300% increase of purchases made for online food retailers. The Food Industry Association’s annual analysis report which published this results, also stated that many traditional retailers had to hire people for e-commerce and delivery just to meet the demand of consumers.

The demand has gone up so exponentially, that American supermarket giant Whole Foods Market, opened up their first ever “dark store” which is designed solely for grocery delivery and pickup. The purpose of this store is to facilitate a fully functioning delivery service so that the traditional stores are not interrupted by the process of picking the items, filling the bags, and getting them ready for delivery. In other words, this store is available only for fulfillment of online orders, and not open to public consumer shopping. 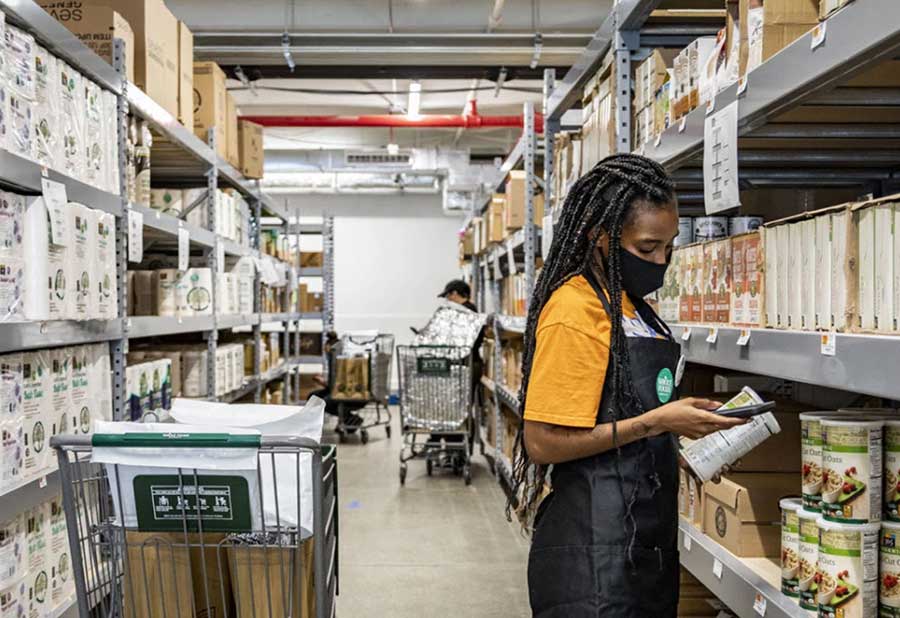 The store itself resembles a warehouse of sorts combined with the usual store shelf layout and freezers. There is also an entirely new section stocked with delivery wrapping materials.

Though this rush for delivery and curbside pickup was the result of lockdowns and general pandemic anxiety, it has remained a fixture in food shopping because consumers have found it to be the safest and most convenient options. Consumers who were previously hesitant to accept grocery delivery as a norm, have begun using it regularly – even after the initial panic of the virus has subsided. Brought on by the need of the pandemic, online grocery options are sure to stay much longer after the pandemic has slowed.

Longer lists: To reduce the amount of times that consumers needed to shop for their food, studies by Deloitte have shown that consumers are opting for longer shopping lists. Consumers are less keen on stopping into grocery stores a few times a week for smaller shops. Instead, they have begun planning for weekly or even biweekly shopping trips. As a result, they have been following longer lists so that they can buy their products in bulk. Consumer insight trends project that the desire for less frequent grocery trips will continue long past 2020, meaning that the long grocery lists will live on.

While this year has seen many changes, it’s clear that the food industry will continue to meet the demands of consumer behavior. Though the industry has faced many challenges – particularly with production and stocking – it still has been able to give consumers what they need during this uncertain time. Manufacturers and grocery stores are innovating in their own ways, with everything from implementing delivery services to redesigning the layout of stores in order to operate more safely.

The Covid-19 Crisis has certainly opened up opportunities for growth and improvements in the food sector that were not anticipated – yet, many of the key players were able to tackle these concerns to feed the nations.

Regulations, Speed-to-Market and Innovation: How to stay compliant and competetive in an ever-changing market place.

We use cookies to ensure that we give you the best experience on our website. If you continue to use this site we will assume that you are happy with it. Please see our privacy policy for further information. Ok
​x

How to stay compliant in an Ever-Changing Marketplace

​How to assure compliant ingredients labels from the beginning of

​How to stay compliant E-Book

​How to assure compliant ingredients labels from the beginning of